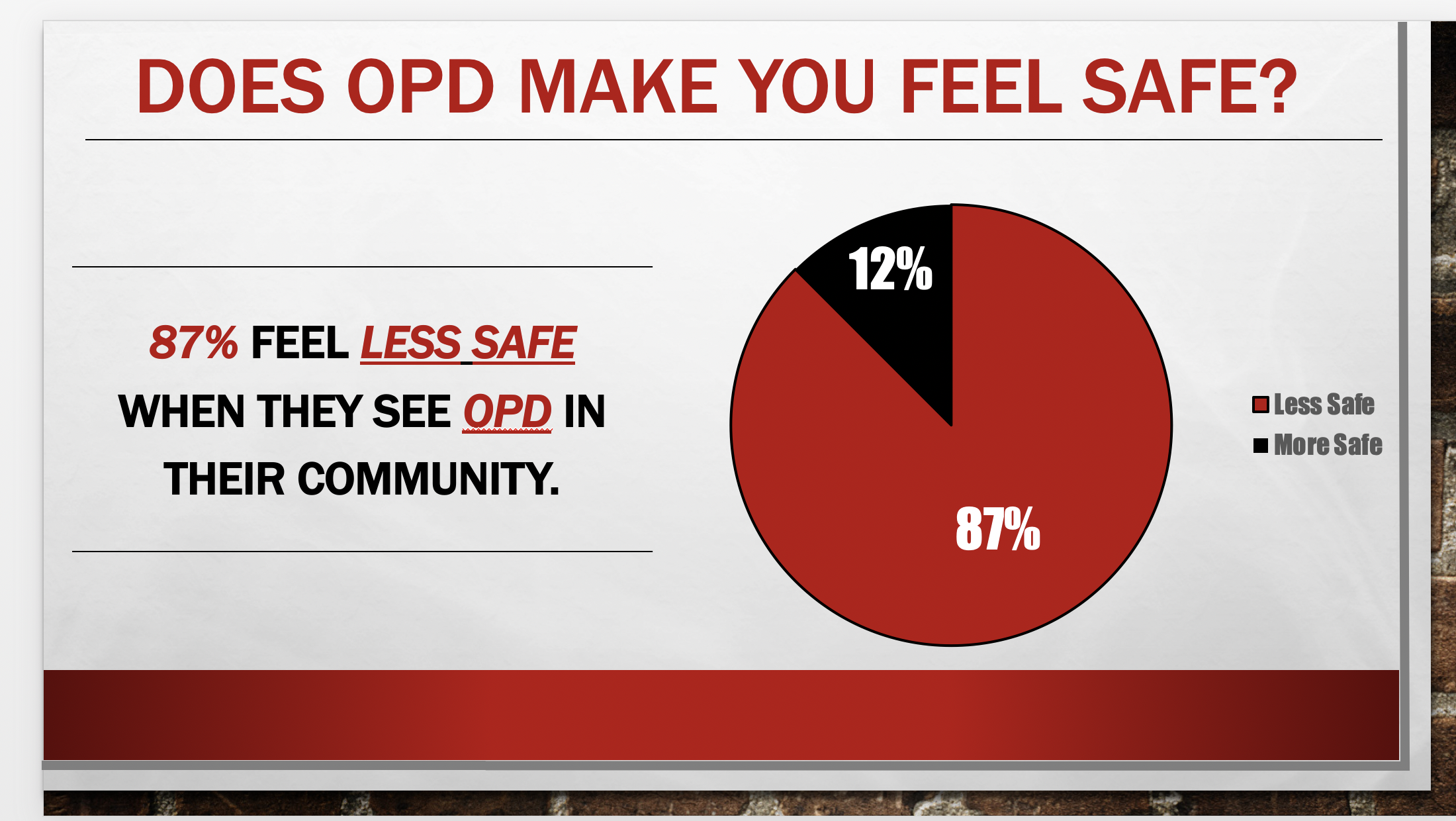 Oakland, CA —  Today, Urban Peace Movement announced a new survey that takes an unprecedented look at how Black men in Oakland feel about safety, with 87 percent of Black men reporting that they feel less safe when they see Oakland police in the community.

“Every day, in Oakland and across the country, Black men are over policed and not protected,” said Nicole Lee, executive director of Urban Peace Movement. “Mainstream and media narratives often ignore that Black men are the primary victims of violence, and this survey shows that investing in policing is not the answer as Black men feel less safe when they see police in their communities. It is time to invest in the strategies we know are proven to reduce violence and expand opportunity,  such as stable quality housing, living wage employment, mental health services and more.”

The men who contributed to this research are some of the most qualified experts on what makes Oakland unsafe and what solutions city and community leaders must prioritize to address these issues. In a focus group discussion on what they observe in unsafe communities, respondents pointed to a lack of access to healthy foods, gun violence, interacial violence, drug use and graffiti. When asked about the challenges they faced growing up in Oakland, one respondent said that “No one wants to see you win.” Many respondents shared experiences of childhood poverty that led to bigger problems for them and their families including drug addiction, neglect, and trauma.

Rather than feeling safe because of police, respondents associated “violence” with law enforcement, which is largely based on first-hand experience. Other respondents associated white people with violence, with agreement that preferential treatment to white perpetrators of crime by police and media is another form of violence towards Black men. Black men are not afforded thoughtful, sympathetic or root-cause explanations in association with their circumstances.

“The violence Black men experience is a predictable outcome for communities challenged by systemic hardships of every proportion. Safety, like food and housing, is the most basic of human rights,” said Sikander Iqbal, Deputy Director of the Urban Peace Movement. “It is outrageous that a thriving American city like Oakland has prioritized police funding in place of the needs that Black communities have long demanded. Black men and Black communities are important to Oakland, and they must be supported to thrive here.”

Their comprehensive recommendations include:

This anonymous survey was administered from January 4 – February 4 by Urban Peace Movement staff and community ambassadors directly with Black men from Oakland.

Black men, who represent the most vulnerable population to police violence, violent injury and gun violence in the country, are one of the least represented in city governance and budgeting decisions. Oakland’s Reimagining Public Safety Taskforce commissioned this data and insight from those who have not been included in the conversation to inform how to dramatically shift resources to methods of community healing and safety.

Urban Peace Movement (UPM) builds youth leadership in Oakland to transform the culture and social conditions that lead to community violence and mass incarceration in communities of color. UPM’s model of “Healing-Centered Youth Organizing” supports young people to feel self-confident and hopeful while empowering them to work for healing, social justice, and a brighter future for all. https://urbanpeacemovement.org